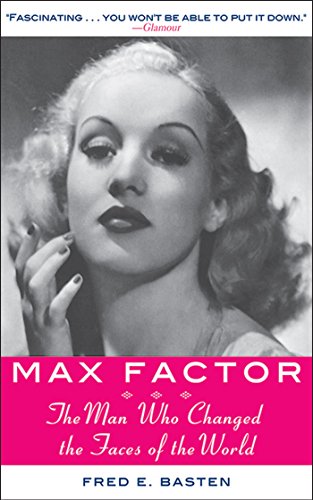 The true story of a poor immigrant who built a Hollywood cosmetics empire is told in “this biography of the man who gave the world a makeover” (Publishers Weekly).

There was a time when “nice girls” didn’t wear makeup. Max Factor changed all that. Born Maksymilian Faktorowicz in the late 1800s to a poverty-stricken Polish family, he worked as a beautician for the Russian royal family—until bigotry forced him to flee to America, where he opened a small cosmetics store in Los Angeles.

His work caught the eye of the burgeoning film industry, and soon Max Factor was the makeup of the stars, and Factor himself was designing the legendary looks of Katharine Hepburn, Rita Hayworth, Bette Davis, and countless other style icons of the day. But he also brought makeup to the masses, not just to movie stars. A revolutionary of the industry, he invented false eyelashes, lip gloss, foundation, eye shadow, the eyebrow pencil, concealer, wand-applicator mascara, and water-resistant makeup, even as he developed such concepts as color harmony and the celebrity endorsements that are the backbone of today’s cosmetics business. Now, ordinary women could add a little big-screen beauty to their own lives, with Max Factor products sold in department stores and drugstores everywhere.

At once a rags-to-riches story, a portrait of Hollywood’s golden age, and a look inside the origins of a modern multibillion-dollar industry, Max Factor is “fascinating . . . you won’t be able to put it down” (Glamour).

. Silly mistakes can ruin your site's credibility. I've used a tool called SpellScan.com in the past to keep mistakes off of my website.

Customize
Chat users
No users in the channel

Exactly How To Navigate A Drugstore Beauty Section